This post is the first in a planned series of articles about my experiments with an Arduino Gemma and a NeoPixel ring with 16 RGB LEDs.

I’m not going to go into detail about how to install or configure the Arduino IDE. Start with the Adafruit Gemma setup instructions and then the NeoPixel library installation instructions that are part of the NeoPixel Überguide.

Make sure you are using a USB cable that is not power-only!

We are going to write a really simple program that randomly chooses a color between 0 and 255 and then assign that color to all LEDs. The code is pretty simple C++ and uses the Adafruit NeoPixel library and will run on our Arduino Gemma.

Create a new sketch in the Arduino IDE. Click the “Save” button and name your sketch “random_same”. 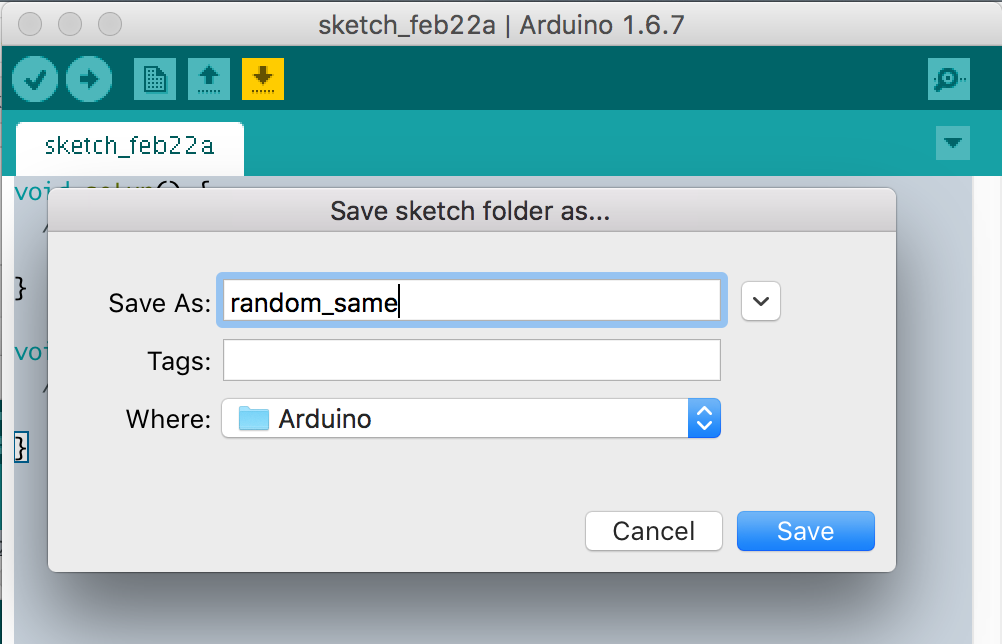 Let’s start off by letting the compiler know about the Adafruit NeoPixel library with an include directive.

We can now go ahead and create an object that manages all the interaction with the NeoPixel. The Adafruit_NeoPixel call we are using takes the number of pixels as its first argument and pin number as the second. My NeoPixel has 16 LEDs and is wired to the D0 pin on my Gemma.

There is an optional, third argument to the Adafruit_NeoPixel function that lets you specify the type of NeoPixel. The default choice worked for me. Consult the NeoPixel documentation to see if you need to explicitly configure its type.

Your sketch may already contain a setup function definition. We are going to replace that with a version that initializes the NeoPixel strip and sets an initial brightness. Your Gemma will call the setup function when it starts executing your program, so it’s a great place for anything we want to do once.

The NeoPixel is ready to go. Let’s give it some color. We do that by defining a loop function which the Gemma will execute over and over again.

Our loop implementation uses a Wheel function that takes an eight-bit number between 0 and 255 (inclusive) and translates that into a 32-bit number the NeoPixels use as color choice. I talk about Wheel in another post. Make sure to include a copy at the end of your program.

We use the Arduino random function to compute our input to Wheel.

Once we have our color, we use a for loop to assign that color to each pixel with the strip.setPixelColor call. This function takes the index of the LED as its first argument (the first LED is at index 0) and a 32-bit color as its second.

A call to strip.setPixelColor does not immediately send any instructions to the NeoPixel. Instead, all color choices are buffered in-memory by the NeoPixel library and sent to the device when strip.show is called.

We add a delay at the end of loop to make our code pause after each color choice. The delay function takes a number of milliseconds as its only argument. Increase the delay value to wait longer. Decrease the value to make the color change more often.

Things will blink really quickly if you remove the call to delay entirely!

As you get a little more comfortable writing code for your Gemma and NeoPixel, you should poke through the source for the NeoPixel library. The examples may give you some ideas for further experimentation. The NeoPixel calls themselves can also be helpful. I read the implementations of setPixelColor and getPixelColor more than once!